If there's on thing that we can surely all agree on after the carnage of second Ashes test it's that Australia have "the momentum".

Cricket commentators, and in fact sports commentators in general, really like to talk about momentum. The idea seems to be that if a team scores a win- particularly a big win- in a series they can carry those good vibes with them into the next game, making them materially more likely to win the next one. The defeated team meanwhile, like a mouse transfixed in the path of a charging rhinoceros, better brace themselves for all that momentum coming their way.

I think the frequency with which "momentum" is wheeled out bothers me because it's extremely easy to invoke in hindsight and thereby argue that a particular run of victories or defeats was somehow inevitable, but is very quickly forgotten about when events take a different turn.

So the question for today is: does having the momentum make a difference to the result of test matches?

Specifically I've looked at test series of more than two matches which were poised at 1-1 after two tests. I've chosen to do this because I want to see if the effect exists in games between teams who are fairly evenly matched- otherwise is not an interesting effect at all, it's just another way of saying "Team A is a lot better than Team B and will still be a lot better than them when they play again next week." Moreover, it's the kind of situation where momentum gets brought up a lot.

In a test series poised at 1-1 after two tests, the team which one the second test will be widely proclaimed to have the momentum- having impressively wrestled that momentum from their opponents who won the first test. If momentum helps you win test matches then the team who won the second test should be more likely, on average, to win the third. 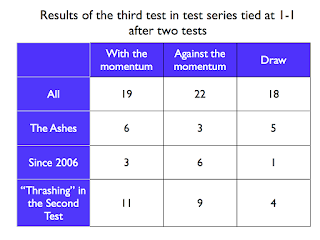 After a bit of trawling through the archives I was able to find 59 test series of greater than two matches which were poised at 1-1 after two games. The third test of those series went "with the momentum" 19 times (i.e. the team who won the second test also won the third) but went "against the momentum" 22 times. There were 18 draws. Basically, momentum makes no difference.

"But hang on," you might say, "Australia didn't just beat England in the third test, they absolutely hammered them- surely that means something momentum-wise?"

Actually, no not really. For the final bit I just looked at those series where the second test was a "thrashing", to see if in those cases the momentum carried over into the third test. Obviously the cut-off for what defines a thrashing is a little arbitrary, but the definition I went with was:

Restricting to that subset the result is: 11 wins with the momentum, 9 wins against the momentum and 4 draws, so still no noticeable effect.

All of this is not to say that Australia won't win the third test. As an England fan I'd like to think they might not, but truthfully, I think they probably will. Before the series began, most observers were saying that Australia had the better side and some people probably revised that conclusion a bit too hastily in the wake of the Cardiff test. If Australia do win at Edgbaston, however, it won't be the momentum that does it for them.