Despite its title, this is not a surprise post about the extraordinary political wranglings currently in full swing in the land of baseball and chilli-dogs. No, this will be about the far weightier matter of whether certain batsmen are especially susceptible to being pinned LBW, and who those current players are.

In cricket commentary, it's common for players whose technique looks somehow prone to leave them trapped in front of their stumps to be described as "lbw candidates". This terminology seems to be applied specially to that particular means of dismissal- batsmen are rarely described as "caught behind candidates".

The questions I want to investigate in today's post stem from this.

Firstly, is "lbw candidate" a worthwhile category- is there a substantial subgroup of modern test batsmen who are especially more lbw prone than their peers?

Secondly, who are these prime candidates in the post-Shane Watson era? I've often heard Alastair Cook described as a "candidate". Does he deserve the title?

We'll also be touching on where in the world lbws are most prevalent.

To tackle this, I took a sample of 45 current test match players, representing all the test nations apart from Zimbabwe, who haven't had much opportunity to play recently. The sample was obtained by taking the most recent test for each nation and including all the batsmen in he top 7 who had played at least 15 tests and who weren't obvious night-watchmen. For each player I looked up the total number of LBW dismissals in their test career and divided it by the number of dismissals overall. This is what is on the x-axis of the graph below, with the batting average of each player on the y-axis. The colour/shape of each point indicates the country for which the batsman plays. 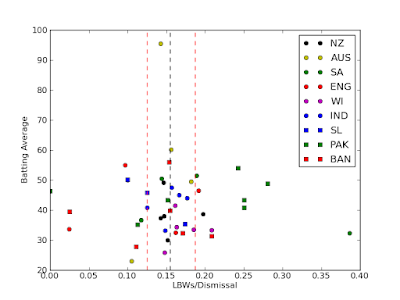 The black dashed line is the sample median (0.155) and the red dashed lines either side are the upper (0.187) and lower (0.125) quartiles. As you can see, the data is quite clustered horizontally suggesting only a fairly small degree of variation in vulnerability to LBW amongst current test batsmen. There's also no significant correlation between the LBWs/dismissal and the batting average, suggesting that having a high proportion of dismissals be LBW doesn't indicate much either way for a batsman's run scoring ability.

There are, however, a few noticeable outliers, far removed from the central cluster to whom we now come: 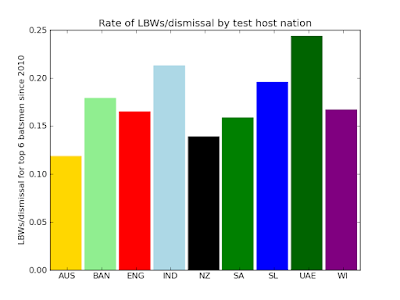 Overall, modern test batsmen don't vary too much in how frequently their pinned leg before, with a small number of exceptions. For what it's worth, Alastair Cook falls close to the central cluster of data points in our first graph, albeit slightly on the high side, with a rate of 0.19 LBWs/dismissal. And with Pakistan's apparently quite LBW prone top order coming to England this summer, it could be quite a good season for the thump of ball on pad, and the slowly raised finger. Maybe.
Posted by chezbenton at 00:47