It seems that James Vince and I have at least one thing in common: despite starting the season full of high hopes, neither of us have had a very prolific summer. I haven't blogged much of late, and indeed I haven't paid as much attention to England's test summer as I normally would, due to various other things that have occupied my time and brain space. This is a shame for me, because the series with Pakistan seems to have been a great one, judging by the bits of coverage I did catch.

In today's return to the statistical fray, I was interested to have a look into how the relative importance of different parts of the batting order has changed over time in test cricket. For instance, it is a well worn claim that tail enders are better batsmen than they used to be- does this mean teams now rely on them more for runs compared to other parts of the team? England have relied heavily on their lower-middle order of late- is this part of a trend or just how things are in one team right now?

To get a sense of this I divided the batting order into 4 parts: openers (1-2), upper middle order (3-5), lower middle order (positions 6-8) and tail (9-11) and looked at the percentage of runs off the bat each part of the order contributed in tests in each year since 1946.

I don't want to undermine my own blog too much, but the result was the most strikingly featureless dataset I have ever written about- as you can see in the graph below. The points show year by year data and the lines show 10 year averages. 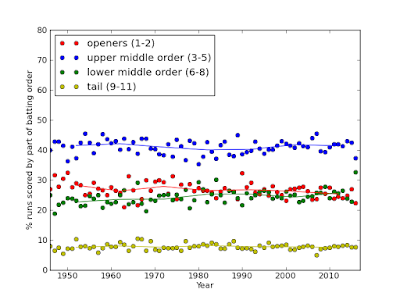 The one small trend you can pick up is that the gap between openers and the lower middle order closes over time from a position where openers were contributing 3-4% more than numbers 6-8
up until the present day when the two contributions are basically equal (openers 25.3% vs lower middle 25.7 % over the last 10 years). This change is consistent with the increased batting role of wicket keepers which we discussed in the last post. There is a big uptick in the lower middle order data just this year, that stands out as rather an outlier- this part of the batting order has made 32.7% of the runs 2016, several percentage points above the long term average. This is in large part driven by England's reliance on that part of the line up- fully 42.6% of England's runs off the bat have come from numbers 6-8 this year. I expect the global figure (and probably England's too) will regress to the mean a bit before the year is out.

Positions 3-5 consistently provide the biggest slice of the run scoring pie. The difference between their contribution and the openers is a couple of percentage points larger than can be explained by the fact there's simply one less player in the openers category. This is consistent with the notion that teams tend to put their best batsmen somewhere between 3 and 5.

Batsmen 9-11 meanwhile, for all the talk of improving tail enders, have chipped in with about 8%  of the teams runs extremely consistently all this while and show no signs of changing.