Double the score at 30 overs

At some point during the display of pure swashbuckling, boundary smashing, batsmanship that was the recent India vs England ODI series something caught my eye. Well, several things did, but only one directly inspired this blog post. It was a someone on twitter estimating what the batting team's final total would be, using the rule-of-thumb that it will be roughly double the score at 30 overs.

In my head, my reaction went something like this "Really? People are still using the 'double the score at 30 overs rule'? Surely that's way out of date now, if ever it was true."

I then continued thinking: "I bet modern batsmen, with their skills honed to play aggressively, playing on flat pitches with short boundaries probably consistently beat that mark these days".

Well, the data shows my snide internal monologue was wrong, as you'll see below. To be honest, a moment's further thinking would have revealed my prediction to be hopelessly naive (not to mention cliche-ridden)- if team's are now scoring faster in the later overs, they're also scoring faster in the early overs. So, how it ends up working out for the "double the score at 30 overs" rule isn't immediately obvious.

In fact, in recent ODIs, if you estimate a team's total by doubling their 30 over score, you will be quite consistently too generous.

The graph below plots the ratio of the final total to the score at 30 overs achieved by teams batting first in (non-weather affected) ODIs since the beginning of 2016, against the number of wickets fallen at 30 overs. Points above the green dashed line represent innings which beat the benchmark of twice the 30 over score, points below the green dashed line fell short of it. The red line is the median ratio as a function of the number of wickets down at 30 overs, just to give a sense of how much it depends on how many batsmen are back in the pavilion. 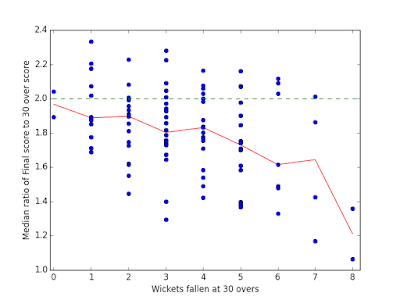 As you can see, there are many more points below the green dashed line than above it. To be precise,  sides batting first fall short of that mark 74% of the time. Even sides who are only one or two wickets down at 30 overs fall short of doubling their score more often than not.

The "double the score" heuristic is still not too bad as a ballpark figure, which I guess is all its meant for- the average ratio between the 30 over score and the final score was 1.81. Nevertheless, it is a fairly consistent overestimate. If you want a rule-of-thumb which is still somewhat simple, but a bit less over-generous "double the score and subtract 10%", might be better.

One might then wonder, how this plays out for teams batting second. Is a chasing side that's only halfway to the target at 30 overs likely to win?

The answer is: no, they are not. Chasing teams that are around halfway to their target at 30 overs usually lose.

The graph below plots, for each ODI chase since the beginning of 2016  (again, in non-weather-affected matches),  the fraction of the target achieved at 30 overs against the number of wickets fallen at that point. Red points represent winning chases, blue points represent losing chases. 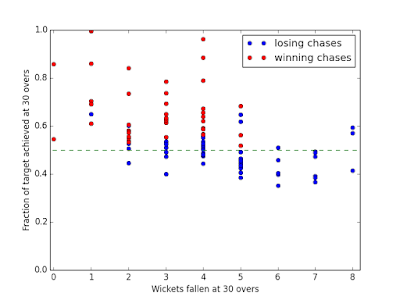 The dashed green line is the threshold of being halfway to the target at 30 overs. You'll notice that teams on the edge of this threshold rarely win and that teams below it never do. (I say never- of course I just mean within the sample I studied- I'm sure there are plenty of examples if I had gone back further).

The bottom line is that a chasing team, who at 30 overs is only halfway there, is very much livin' on a prayer.