Pakistan's spinners have mastered the UAE where others have failed

For this post, I was reflecting on England's recent performance against Pakistan in the UAE. The consensus, after England's 2-0 defeat, seems to be that they performed fairly well but just came up against a side better suited to the conditions.

There's certainly a lot of truth in that. Despite the fact that Pakistan haven't been able to play tests in their home country in recent years their success in the UAE- where they've played in lieu of home matches- rivals some of the strongest home teams in test cricket. The graph below illustrates the 'home' record of each test match side since November 2010 (the period over which Pakistan have been laying regularly in the UAE). The 'x' axis shows the percentage of wins achieved by the 'home' side and the 'y' axis shows their net batting average - bowling average at home in that period. 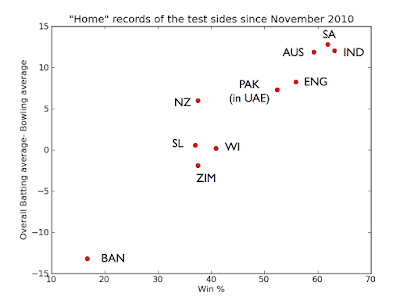 By these measures Pakistan's record in the UAE is very close to England's in England- not bad considering they don't actually get to play at home.

The most obvious difference between the two sides was the performance of their respective spin bowlers. While England's batsmen floundered against the legspin of Yasir Shah; Adil Rashid, Moeen Ali and Samit Patel neither took regular wickets nor kept the runs down. I think it's fair to say that, in the main, they rightly haven't been over-harshly criticised, but I also think there's an air of disappointment surrounding the fact that the best spinners England could muster simply didn't seem to cut the mustard.

I would like to offer one point in mitigation of this- the UAE is actually quite a difficult place to be a non-Pakistani spinner. The graph below plots the bowling averages of 'home' and 'away' spin bowlers in each test match hosting nation since November 2010. 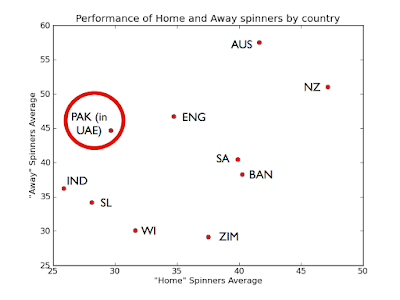 There's a (fairly weak) trend in the direction you'd expect- that in places where "home" spinners perform well, so do "away" spinners, at least relatively. But the performance of Pakistan's spinners in the UAE is far, far better than the overall performance of spinners for the touring sides they've been playing against. Pakistan's spinners average 29.65 in the UAE since November 2010, as compared with 44.69 for spinners from other test nations in the UAE. The difference between those two figures is the second highest for any of the test hosting nations. The largest difference between home and away spinners is in Australia, where baggy green spinners have been taking wickets at 41.63, as against 57.49 for touring sides.

So it seems that Pakistan's spinners have been finding a way to succeed in the UAE, where the best spin bowlers of touring sides have generally been struggling. Whether this is because of the pitches, because Pakistan's batsmen are really good at playing spin, something else, or a combination- I don't know. I do think that this to some extent sets the performance of England's spinners in some context- their collective average of 59.85, certainly remains a disappointment but there were always unlikely to be England's match winners in that series (although Rashid nearly was in the first test, but for the bad light). I also think it illustrates that there was never likely to be much tactical value in picking a third spinner for the third test, but perhaps a discussion of how to balance a bowling attack is one for another day.