Batsmen and the burden of the captaincy

It must be tough being a test match captain. The potential for days in the field, a mind full of bowling changes and fielding positions. Commentators and fans analysing your every move. Are you being too funky or not funky enough? Then, after all that, you have to go out and bat. As well as being held responsible for the collective success or failure of your team, you have your personal performance to take care of. The burden is heavy. Surely you're exhausted. Something must give, mustn't it?

It seems to be a fairly commonly held belief that the cost of doing what test teams usually do, in making one of their best batsmen the captain, will often come in the form of reduced run output from the player in question. In discussions of Joe Root, England's presumptive captain-in-waiting, I have certainly heard it raised that making him captain will dent his prolific run scoring.

It seems a reasonable enough worry to have. The captaincy certainly carries a lot of pressure with it, and a lot of extra responsibility which one would have thought would make it harder to focus on one's batting. But what does the evidence say? How does the captaincy affect a batsman's performance? 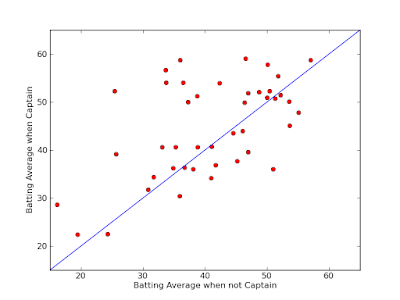 Points below the blue line represent players who's batting average was lower when captaining, and points above the line represent players who were more prolific when skippering. There are two things to notice here:
1) Most points fall fairly close to the blue line- i.e. for most of the players in our sample their batting averages with or without the captaincy only differ a little bit.
2) There are more points above the line than below it (26 vs 17 to be precise)- i.e. it's more common for a player's average to improve with the captaincy than to decrease.

On average, the players in this sample increased their batting average by 3.76 runs when carrying the captaincy burden. I wouldn't read too much into that positive shift as it is much smaller than the sample standard deviation. The main take home message is that for most players the captaincy doesn't seem to make much difference to their average, and only for very few does their average significantly decrease.

I have heard it said that the England captaincy may carry peculiar pressures- perhaps due to the often slightly tempestuous relationship between players, media and fans in English sport. So one may wonder about the England captains of recent vintage in our sample. Of those only, Michael Vaughan (36.02 with captaincy vs 50.98 without) shows a big negative shift. Alastair Cook (49.94 vs 46.36), Andrew Strauss (40.76 vs 41.04) and Nasser Hussain (36.04 vs 38.10) all have pretty similar numbers for the two cases. Mike Atherton shows a slightly bigger shift but in the positive direction (40.58 vs 35.25).

So there's really not much compelling evidence to make us think that the captaincy depresses the run scoring of batsmen. But why, then, is this believed? I don't know, but my personal theory is this: when a player is given the captaincy they're usually coming off the back of a pretty good run- since you generally don't want to give the captaincy to a player unsure of their place. But all good runs must end eventually, for all players, captaincy or no. Whenever that does happen, this will be widely attributed to the pressures of captaincy catching up with them and the belief is perpetuated.

Test match captains are made of stern stuff- despite the pressure, they'll just carry on batting.
Posted by chezbenton at 04:00