Today, I bring you a festive look at the data! I mean, not that there's anything particularly Christmassy about the content of this blog post- but hey, it's Christmas, there are mince pies in the oven and I'm writing about the batting statistics of wicket keepers. To me, that's festive.

This time around, the piece of cricketing received wisdom coming under the microscope is the belief that when a batsman who's able to keep wicket has to do so, it impacts negatively on their run scoring ability. The most famous (and, not coincidentally, also the most extreme) example of this is Kumar Sangakkara who averaged an acceptable 40.48 when playing as a wicket keeper and a stellar 66.78 when playing as a specialist batsman. It seems reasonable to believe that the physical and mental strain of long periods of wicket keeping would make run scoring harder, but the same could be said of the pressure of the captaincy- and we saw in the last post that captaincy actually seems not to generally make so much difference to run scoring output.

I actually prepared the research for this post a while ago, but didn't write a post on it because- as you'll see below- there isn't so much to work with in this case, and I worried that there wasn't enough numerical meat to make a satisfying analysis. However, the issue came up on the superb Switch Hit podcast this week- in the context of AB de Villiers' stewardship of the keeper's gloves for South Africa- and I thought that since it's an interesting question, I might as well write it up. Decide for yourselves whether the data justifies the conclusions.

So, what we want to do is take some test match players who've played a decent number of tests both as wicket keeper, and as a specialist batsman and compare their batting averages in those two sets of games. The problem is that there are very few players who fit that description. Specifically, I could find only seven players who played both at least 10 tests as the designated wicket keeper and at least 10 not as the wicket keeper. That rather select club is listed in the table below 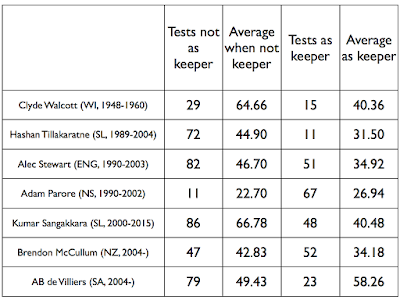 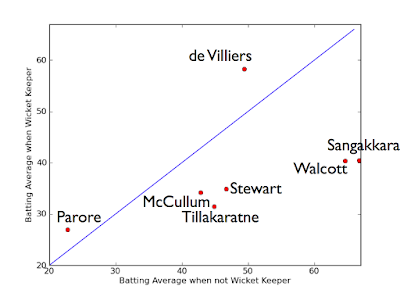 Seven players isn't much to draw a conclusion from but nevertheless, the evidence in this case weighs in favour of the received wisdom- it does seem that having to keep wicket depresses a batsman's average. Of our seven players 2 have better averages when playing as keeper and 5 do worse. That in itself could easily just be chance, but what's more notable is the players who are doing worse as keeper tend to be doing rather a lot worse, suggesting that there is a potentially rather a strong effect at play. The average difference between averages when keeping and not our sample was -10.19 runs- less extreme than Sanga's -26.3 but a pretty big difference all the same.

Which makes AB de Villiers' bucking of the trend all the more special. He averages fully 8.83 runs higher when keeping. Of course, this won't necessarily last. It's quite possible - maybe even likely - that if he stays as South Africa's first choice gloveman for a couple more years his average as keeper will regress back in line with his average when not keeping - or even below. Or perhaps - as he has in many other ways - de Villiers will prove to be exceptional in the truest sense of the word.

I want to finish this post by thanking you all for reading and to particularly thank Chris of the excellent blog "Declaration Game" for kindly promoting my blogging over the last 6 months. I was honoured to be included in his "Select XI" blog posts of the year, which if you haven't seen it yet is well worth a look- providing a very broad cross section of some extremely interesting cricket writing.

Merry Christmas!
Posted by chezbenton at 06:24