"Can you test the hypothesis that Ian Bell only scored easy runs?"

Right now seems like a good time to reflect a bit on Ian Bell and his reputation as many are suggesting his international career could or should be about to draw to a close, after an Ashes series where he struggled to cut sufficient mustard. So, here goes.

Clearly, how we answer the question of whether Ian Bell deserves to be labelled a scorer of 'easy runs' is going to depend on how we define 'easy'. One, very simple, way we could try to define it is to say
"easy runs are those scored against test cricket's weakest attacks"

The graph below plots Ian Bell's batting average against each test side against the overall batting average of middle order batsmen (positions 3-6 in the order) against each opponent over the period of Bell's career (Aug 2004-present). Points which fall above the red line represent nations against whom he has outperformed his peers and those below the red line represent the nations against whom he has fared worse than the 'average' middle order batsman of his era. 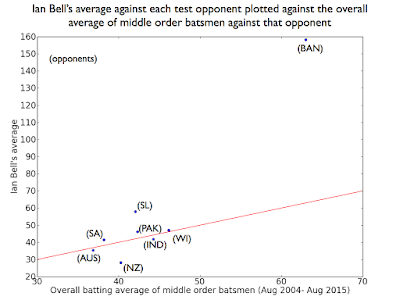 His batting average against each nation for the most part follows that of the average middle order batsman. Against Australia, South Africa, Pakistan, India and West Indies his average is within a few runs either way of the average performance for middle order batsmen against those opponents. There a couple of large exceptions in Sri Lanka (against whom he has over-performed compared to his peers) and New Zealand (against whom his record is poor). Then there's a giant honking outlier in Bangladesh, who he has really cashed in against averaging 158 compared to the 'average average' of 63.

Another way of looking at Simon's question is to define 'easy' and 'difficult' not by the opposition but by the match situation, saying something like:

To look at whether Ian Bell primarily scores runs when he comes in with England in a good position, I've compared his performance when coming in with less than 20 runs per wicket on the board (i.e. at scores worse than 20-1, 40-2 etc) against his performance coming in with more than 80 runs per wicket scored (scores better than 80-1, 160-2 etc). The results are in the table below. I've also broken it up into time periods pre- and post- his being dropped after the West Indies tour of 2009, an event many people consider a watershed in his career. 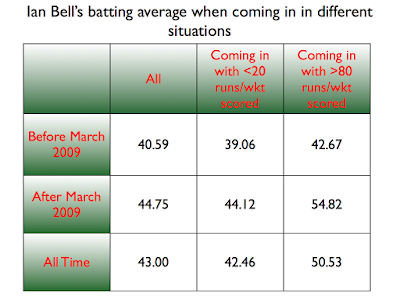 The result is that yes, he does score more runs coming in with a good platform laid, then coming in to a dicey situation. This is even more true of post-2009 Bell than pre-2009 Bell. Post-2009 Bell seems to be quite the master of putting the boot in from a well-laid platform. On the other hand, one shouldn't take it that he's useless when coming in in a tough situation- his average when coming in with fewer than 20 runs/wicket on the board is fairly close to his overall, pretty respectable, average.

Clearly, it's unfair to accuse Bell of being only a scorer of easy runs. The 2013 Ashes stand out amongst Bell's achievements but he's starred on many other occasions too. However, it is true to say he is more prolific at scoring against weaker attacks and in more comfortable match situations. That shouldn't surprise us too much- easy runs are, after all, easier.
Posted by chezbenton at 06:58