Amidst the confusion and excitement of the last two days of crazy test cricket at Trent Bridge, there's been a bit of chat about no-balls. I know-  of all the wonderful, brilliant things that have happened, I want to show you a graph about no-balls. Sad, right?

Yesterday, on two occasions, England thought they'd taken a wicket only for the batsman to be called back because the umpires checked for an overstepping front foot on the video replay and belatedly called a no-ball. Instances like this seem to happen quite a lot in modern test cricket. Many commentators are accusing the umpires of not even looking for no-balls in normal play because they know they can always check if a wicket falls. Therefore, the argument goes, the bowler isn't getting any warning that he's overstepping until it costs him a wicket.

To hear some commentators hold forth on the subject you'd think that no-balls are now only ever called when there's a dismissal at stake (which, just to be clear, isn't true) and that this is a serious moral disservice to the bowler (which I find pretty doubtful, but I guess is a matter of opinion).

So, are umpires really calling fewer no-balls in the DRS era? 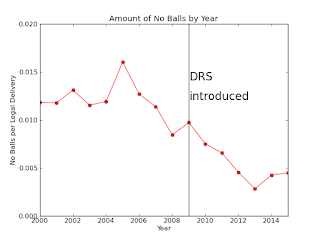 The graph shows the number of no balls called in test cricket per legal delivery by year since 2000. There's a fairly steep drop following the introduction of DRS in 2009 which now seems to have levelled off. No balls are now being called at less than half the rate they were in 2009. Looking at the trend since 2005, it looks like the rate of no-ball calling was already decreasing before DRS. I think that's kind of interesting and I don't know why it would be true. It is possible that it's a false impression created by the way the noise in the data fell. The decrease since 2009 is undeniable though.

Personally, I think there are two ways cricket can go from here:

1) Technology ends up being used to check no-balls for every delivery, not just wicket taking ones-
although whether this can be done without either confusion or incredibly dull disruption remains to be seen.

2) Bowlers, commentators and fans learn to accept "the new normal". Front foot no-balls just aren't going to be called very often unless there's a wicket. If bowlers are really relying on the umpire to warn when they're overstepping then they'll have to get over that. They'll either have to get better at measuring their run up or have one of their fielders watch out for when they're pushing the line and warn them. Or they can just accept that overstepping will cost them a wicket every now and then.

Sure, no-balls aren't as exciting as the England being on the brink of Ashes victory. But they still make for a nice graph.

**ADDITION (9/8/15)**
Someone left a comment on reddit asking whether the drop in no-ball calling could be down to bowlers simply bowling fewer no-balls and have nothing particularly to do with DRS. This is a fair question, and of course, as a general rule, we must be careful not to conflate correlation with causation. I'd be quite surprised if this was the true explanation, as I'm not sure why such marked, global improvement in the avoidance of overstepping should occur, but I suppose it's possible.

I can't definitively rule it out but I did have a quick look at the rate at which no-balls have been called on (would-be) wicket taking deliveries in tests in the 2015 season. I found 11 examples of wickets being chalked off for no-balling and the 2015 season has seen 572 wickets from legal deliveries. 11/572=0.019 which is much closer to the overall rate of no-ball calling 10 years ago than the current rate. Indeed, it's higher than even the rate ten years ago (please beware the small sample though), which isn't too surprising since they probably were also missing some no balls in the pre-DRS era.

1) Suggests that umpires are indeed missing significant numbers of no-balls in 'normal' play, which they're catching on wicket taking deliveries.
2) Is consistent with the notion that the rate at which bowlers are actually overstepping hasn't changed too much. I don't think there's any way to make this definitive since there's no way of knowing how many no-balls umpires were missing pre-DRS.

I do think the more likely explanation is that umpires are catching fewer no-balls rather than that bowlers are simply overstepping less, but the only way I can think of to prove that would be if some poor intern at Sky went through 10 years of archive footage looking for missed no-balls. On balance, it's probably good that that isn't going to happen.