Winning away tests isn't getting harder, but not losing them is

As the Ashes locomotive rumbles into its final stop at The Oval, the destination of the series is decided- another home win, the sixth in the last seven Ashes. Meanwhile, in Sri Lanka, the home team have taken a 1-0 series lead against India, after a borderline miraculous comeback.

Winning tests away from home is hard. It was ever thus, but some are worried that it's harder than ever, that with packed international schedules players simply don't have the will or the time to acclimatise to foreign conditions and that away wins are becoming an endangered species.

With this in mind, I wanted to see how much more unusual winning away test matches has become. The graph below shows the percentage of home wins, away wins and draws in Tests (excluding Tests at neutral venues) in 5 year chunks since 1946. 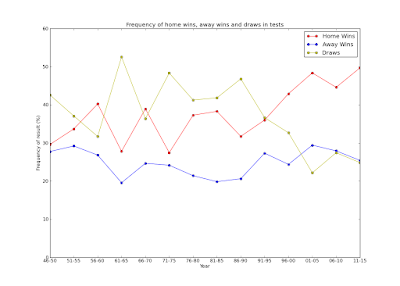 The first thing we can notice is that the proportion of home wins has indeed increased steadily, but markedly since the late 80s. What's interesting to me here is that there has been very little change in the rate of away wins over the same period. Instead, the 'extra' home wins are coming out of the proportion of drawn games- the rise in home wins almost exactly tracks a decline in the number of draws.

I think many cricket fans are aware both that home wins are becoming more frequent and that draws are becoming less so but offer separate explanations for these observations.

A discussion about rise of home wins will tend to centre around modern scheduling and inadequate preparation by away sides. Meanwhile, if you asked a random cricket fan to explain the decline in the number of draws I suspect they would talk about the influence of limited overs form of cricket on test matches- making the game go faster and producing results. They might also make a mention of improved drainage systems. These factors may all be contributing but take no account of the fact that the rate of away wins has remained fairly stable and nor do they explain why home teams are benefitting disproportionately from the decline of the Test match draw. I can't claim to properly explain these things either, but I hope to come back to it. Perhaps it's that the increasing availability of wins for away sides (because less games are drawn) is roughly cancelling out what would be a decrease in away wins from increasing home advantage.

It's not the winning that away teams are getting worse at, it's the not losing.
Posted by chezbenton at 10:03